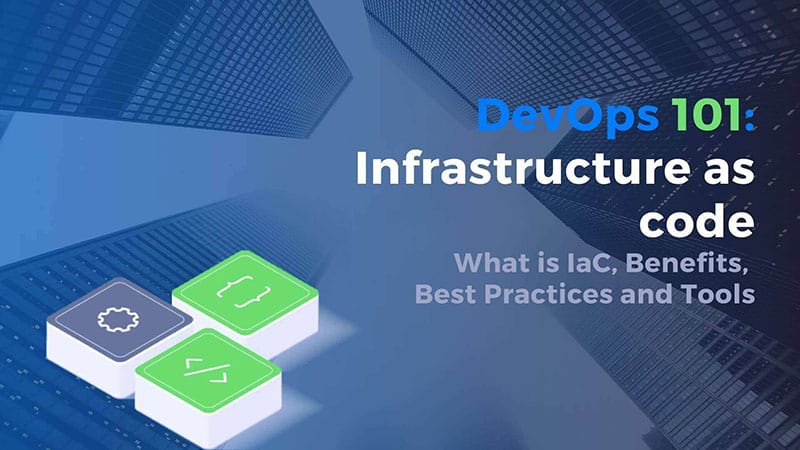 What is IT infrastructure and why is it important?

Let’s start by defining what IT infrastructure actually is. We’ll later dive into how Infrastructure as Code IaC enables the success of the DevOps process.

Technology empowers nearly every aspect of today’s businesses, from work processes and operations to goods and services. When properly networked, IT infrastructure can be optimized to:

If an IT infrastructure is scalable, but reliable and secure, it can help an enterprise meet its goals and provide a competitive edge in the market.

What did IT infrastructure management look like before automation?

Back in the day, managing IT infrastructure was a tough task. System administrators had to manually manage and configure all of the hardware and software components that were needed for the applications to run. It required physically setting up servers in place and configuring them. Once the machines were configured to the correct setting required by the applications and the OS, only then it was possible to deploy the application. As expected, this manual process often resulted in several issues:

In order to support the infrastructure and perform all required tasks at each step of the process, it was necessary to employ many professionals-from software engineers to hardware technicians. Apart from the fact that obviously, these specialists had to be paid, there was also the need for additional management, which in turn brought management overhead and added unnecessary communication complexity within the organization.

What was the result? Money evaporated.

I feel I should also mention here the need to build and maintain your own data centers, which as you might imagine, increased the costs immensely.

Once you have your whole IT infrastructure set up & configured, how to monitor it and ensure it’s performing optimally? When you face downtime, how do you pinpoint exactly where in the infrastructure the issue occurred?

Monitoring tools nowadays give full visibility into the performance of your entire IT infrastructure.

Since the manual configuration is slow, applications would often struggle with traffic spikes, while the engineers would be desperately trying to set up servers to manage the load. This necessarily impacts availability. Most importantly, they directly affect the speed of delivery. If the organization didn’t have backup servers, then you’d reach a long downtime and hence-the risk of losing new and existing business.

Anticipatedly, when you have many people manually deploying configurations, deviations would be inevitable.

It did solve some of the problems we just discussed. Cloud computing basically is the on-demand delivery of IT resources and technology services, such as computing power, storage, and databases. It relieves you from building, owning, and maintaining physical data centers and servers, and the high costs associated with it.

As revolutionary as it is, Cloud computing is far from the answer to all of our problems, though. While it allows you to have your infrastructure set up quickly and in real-time—thus solving severe issues such as high availability and scalability—it doesn’t help solve the inconsistency problem. The truth is that when you have more than one person manually performing the configurations, you’re bound to get deviations.

What is Infrastructure as Code and what problem does it solve?

I’m sure you’ve already stumbled upon many definitions of IaC, yet I’ll start with the definition Wikipedia provides:

“Infrastructure as code is the process of managing and provisioning computer data centers through machine-readable definition files, rather than physical hardware configuration or interactive configuration tools.”

This definition is great, but it’s rather wordy. Let’s rewrite a simpler one together:

Infrastructure as code (IaC) is the concept of managing and provisioning your IT infrastructure using configuration files.

You may ask subsequently: “Why would you want to do that?”

By embracing cloud computing along with IaC, you dramatically reduce your costs. That’s because you won’t have to spend money on hardware, hire people to operate it, and build or rent physical space to store it.

There is another opportunity for cost-efficiency: by embracing automation strategies (IaC being one of them) you save money. How? You see, when you have smart, high-paid professionals performing mission-critical tasks that bring value to the organization instead of slow, repetitive ones, you enforce your full potential.

Infrastructure as code enables you to quickly set up your complete infrastructure by running a script. You can do that for every environment, from development to production thus making the entire software development lifecycle more efficient.

Provisioning all your infrastructure manually is risky. With IaC, the infrastructure’s components are represented as reusable bits of code, which makes the process far more secure & reliable. You may review this code in its source code repository, as well as its changes over time.

Manual infrastructure management will result in inconsistencies, no matter how hard anyone tries. By using IaC, you basically guarantee that configuration files will be validated and stored in a repository. Thus, you guarantee the same configurations will be deployed over and over, without failures.

How does Infrastructure as Code (IaC) work?

Infrastructure as code is an approach to infrastructure automation based on best practices from software development. It emphasizes consistent, repetitive practices for securing and modifying systems and their configuration.

For the most part, IaC workflows consist of two basic steps.

First, DevOps engineers write policy files that define the configuration of a resource. You may write the policy files in a variety of languages as different IaC tools support different languages.

And secondly, DevOps engineers deploy those policy files to be executed by an IaC tool. The IaC tool automatically applies the configurations to the designated systems.

Moreover, you can also use IaC to update existing resources. Changes are made to definitions and then rolled out to systems unattended processes that include validation.

Infrastructure as a code Main Principles

Large enterprises with the highest requirements for the reliability of their own infrastructure profit hugely from Infrastructure as Code. It supports their growth, as long as the main ideas and principles are properly implemented.

Use a code workflow strategy that includes review, verification, and approval system. Basically, you must pave IaC scanning into the CI/CD pipeline: similarly to how you test and scan application releases before deployment, do the same with IaC rules.

You typically need to update IaC files along with the IT environment they help manage. The easiest and most appropriate way to manage these updates is to store IaC files in a version-control system.

Define your infrastructure definitions and tasks such as disaster recovery, backups, etc. using code rather than by writing documentation or runbooks.

Every once in a while, IaC tools access sensitive information, such as passwords or encryption keys, in order to configure resources.

By using IaC templates to create new resources from scratch whenever an update is necessary, you minimize the risk of creating configuration drift within existing resources.

Structure your codebase so that different teams and team members can access and manage it, using a predefined control system.

Infrastructure as Code tools: differences and how they work

Ad-hoc scripts are a simple approach to automation. The ad-hoc script performs certain actions on a server. The approach is extremely useful when performing one-off tasks, but not complete infrastructures. This can be Achieved with General-purpose programming languages ​​such as Python, Bash, etc.

Configuration Management tools aim to install software on existing servers. They also use script-like code, but they require a coherent and predictable structure – something that Ad hoc scripts lack. Another advantage is that, unlike Ad hoc scripts that run on a local machine, configuration management tools are designed to support multiple servers. Such tools are Cobbier, Ansible, Vagrant, Chef, and others.

The Orchestration tools are most common for achieving IaC. These tools are used in the process of creating (provisioning/orchestration) various resources needed to build the infrastructure (servers, databases, load – balancers, etc.). Representatives of the Orchestration tools are Terraform, CloudFormation, and OpenStack Heat. Depending on the cloud platform, different resources can be raised with them, such as servers, database services, virtual networks, load balancers, and many others.

To wrap it up: Infrastructure as Code Enables DevOps Success